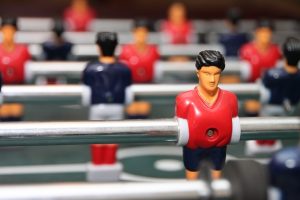 Want to win at foosball? Apply some of the tips provided here and before you know it, you’ll be the undisputed champion of table football at home, in your village, friends group and perhaps even county!

If you have been on this earth for 20 years or more, the simple but adrenaline-charged game of foosball (a.k.a. ‘fuzboll’ or ‘table football’) is something that’s probably featured in your childhood. The extent to which people embrace the game does differ, however, the chances are that there has been a foosball table somewhere in your background at one point in time; whether at the birthday party of that lucky kid who had one, or at your local youth club.

Apart from being illegal, spinning can hamper your attempts at improving your foosball skills. It’s one of the most common fallacies amongst casual and novice foosball players; that spinning can disrupt the opponent’s rhythm around the midfield and – in regards to shooting – is the best way to achieve maximum power shots. This is simply not true. Spinning may make it hard to control your players and will turn your passes or shots into something more like a game of chance. Most own goals have been scored due to errant spins that have resulted in the ball shooting backwards past the unsuspecting and helpless keeper.

When your opponent’s defender is right in front of a striker, what should you do? Likewise, when you attempt to get the ball out from your back when being blocked by your opponent’s forward. The average foosball player will react to such a situation with frustration, desperation, or panic and hack the ball forward – doing so will lead to a potentially devastating rebound off your opponent – or take the risky ‘backpass ploy’. However, try learning the skill of merely tapping the ball sideways to the players beside you, and you will leave your opponent immediately on the wrong foot (or at least in a position where they are stuck at one point on a bar).

Use Your Goalie Properly!

Managing your goalie is one of the toughest tasks when it comes to playing foosball. Most often, people find themselves having to manage the goalkeeper with their weaker hand, having to react quickly with sharp reflexes. This has been the downfall of many foosball players. However, if utilised well and to his full potential, your goalie can – just like in real-life football – be your team’s strength rather than its weakness and could even score those odd long-range ‘pot-shot’ goals. Learn how to control your keeper with one hand while managing the ball in the outfield with the other – so you are always ready for any sudden strikes or rebounds. This skill is essential if you want to become a top player.

Be Ready to Deal with Different Hostile Elements

A lot of people never achieve foosball glory. That is the cruel and sad reality of the game. As a result, many people end up spending their time playing the game in domestic settings. Because of this, foosball tables are usually exposed to all kinds of wear and tear; pets and siblings, for example. So, as immaculate as your foosball table is, do not get comfortable. It is not with the best resources that you’ll be judged! It is when several handles are missing, the ball itself is a chewed up, mangled bouncy ball (the original and the two spare ones having been chewed up by the younger brother, crazy aunt or dog) and the table has a huge slant, that your foosball abilities will be truly tested. If however, you have been judged on the most well-loved foosball table and not found wanting, then by all means treat yourself to an immaculate model such as the Bonzini foosball table.

Learn the Art of ‘Dummying.’

Dummying or tricking your opponent is essential in a well played game of foosball. It is a skill that will require a lot of poise and technique. To master it, act like you are about to shoot the ball by making similar movements with your wrist, before stopping short at the very last second. Quickly do a sideways shunt towards your opponent and slot the foosball into the net. This move will guarantee you at least one goal at the most crucial stages of your game.